How to Create a Hunt Group

Learn about the various settings you can control in hunt groups and get an overview of how to set up a hunt group with Telzio.

What is a Hunt Group?

A hunt group is a phone system feature that directs incoming calls to multiple recipients based on a custom set of rules, i.e. simultaneous or sequential ringing. Also known as line hunting, hunt groups consist of users, extensions, and devices that are "hunted down" to find an available agent.

Related: How to Set up a Phone Queue

Hunt groups can be implemented without any hardware or equipment. Telzio's cloud-based telephone services include a fully hosted PBX where hunt groups and other features can be managed online.

In addition to hunt groups, you can utilize phone menus and scheduling to automate inbound call routing. The phone menu enables callers to make their own selection and get routed to the corresponding hunt group or department. Opening hours automatically usher inbound calls based on operating hours or employee schedules. Changes are implemented through a web-based portal and go live instantly, allowing for easy and remote management.

Here are some of the different options you have for configuring the rules of a hunt group.

In addition to scheduling hunt groups, Telzio allows individual agents to log in and out of an assigned call group during breaks. A quick toggle to enable do-not-disturb ensures that calls are routed to available agents.

Managers can also be given user permissions to monitor hunt groups and agent calls through a live dashboard that displays calls and BLF indicators in real-time.

Setting up a hunt group with Telzio is intuitive and only takes a few minutes to deploy. If you don't have a Telzio account yet, you can start with a 30-day free trial. From the dashboard, you can create groups, add users to it, and play with a variety of settings to customize the caller experience. Telzio includes unlimited users and hunt groups with your monthly service plan, so you can add and remove agents as needed without incurring additional costs.

With call flows, you can visually design which calls to route to your hunt group, and what to do with calls that are not answered. You can filter incoming calls with opening hours and phone menus, and customize the path for the caller to travel until they reach a person, voicemail, or announcement. 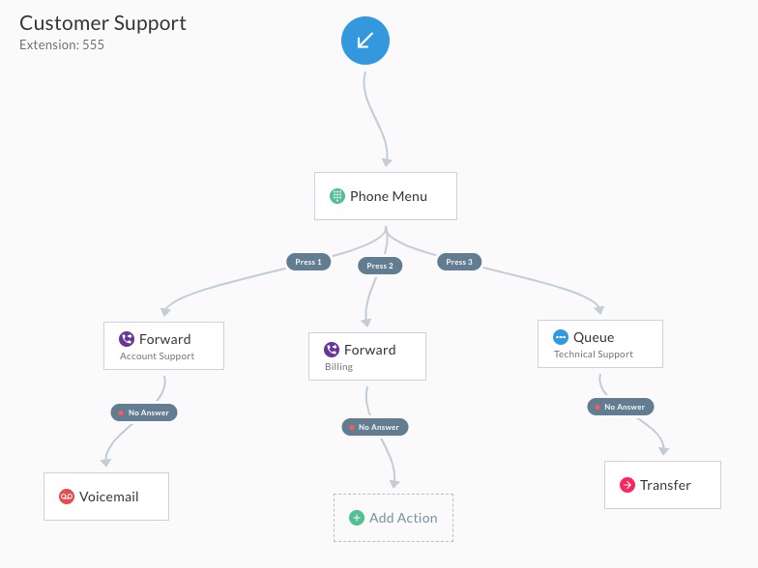 For larger companies, hunt groups can be given unique names that correspond to the hunt group’s function, and can also be assigned an extension. This enables users to transfer live calls directly to that extension to ring the entire group.

Some of the features that are available to customize within hunt groups include:

Any updates that are made go live instantly, so it's easy to update your hunt group with different agents and settings as needed.

Ben is an entrepreneur and self-taught programmer.